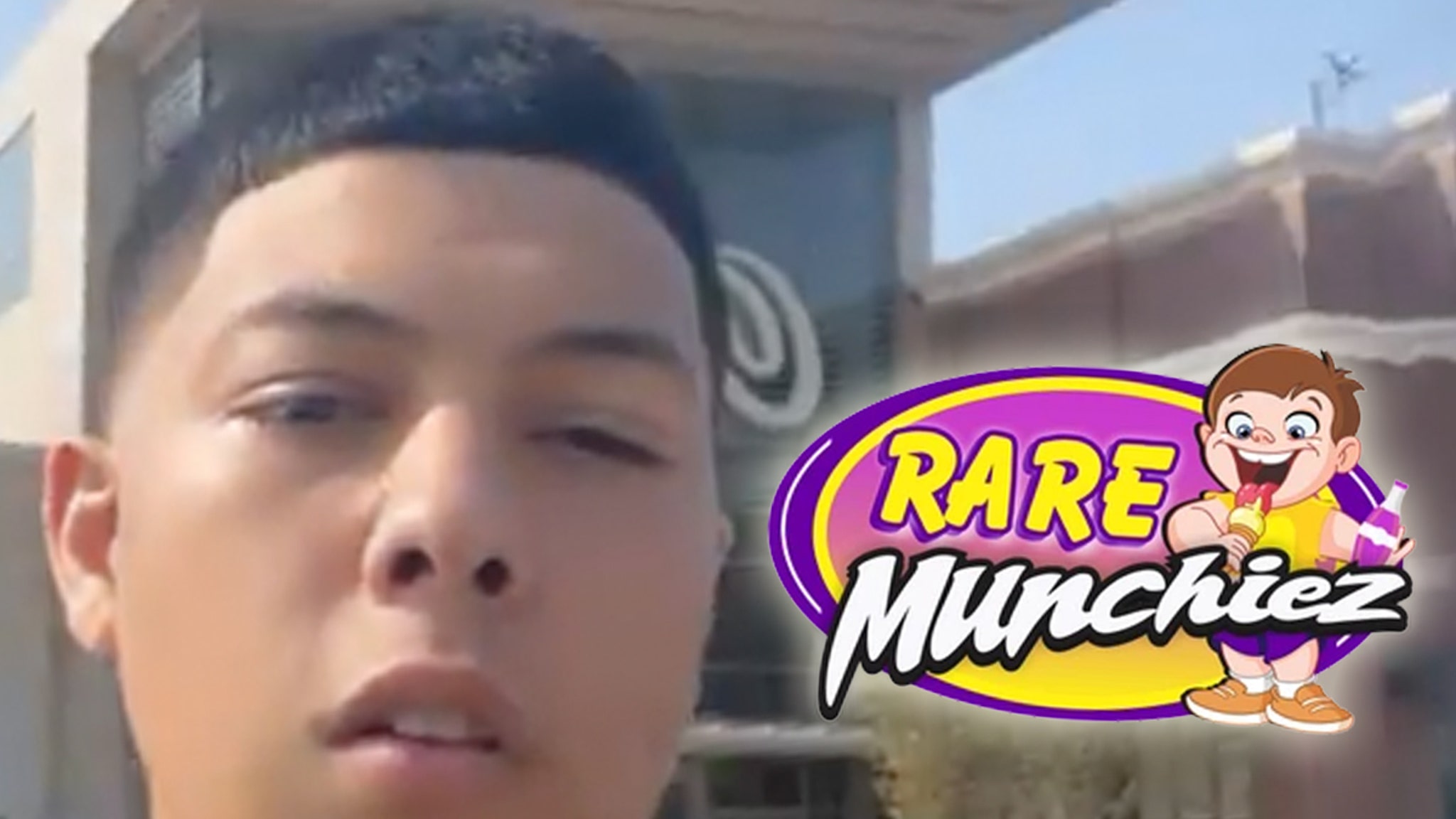 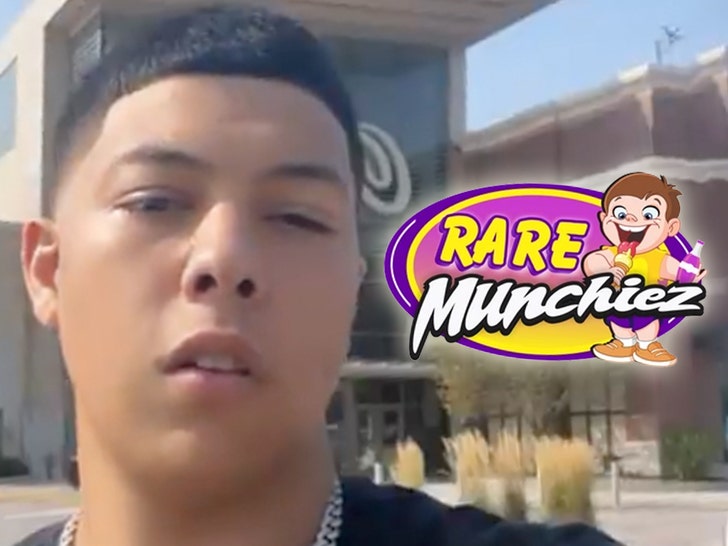 Jackson Mahomes is getting ripped by a business again — this time, a snack company claims the Chiefs QB’s brother scammed them out of a $250 care package.

Rare Munchiez owner Sam Farha tells TMZ Sports … Patrick Mahomes‘ little bro DMed the company on Instagram back in January, saying he loved their product — rare snacks and sodas from across the world —  and would like a care package.

Farha says he had no problem with that … as long as Mahomes posted his business and the bundle for his 260,000 followers to see.

Sam says Mahomes agreed — but after the $250 package was delivered and signed for by the 21-year-old on Feb. 8, he went MIA. 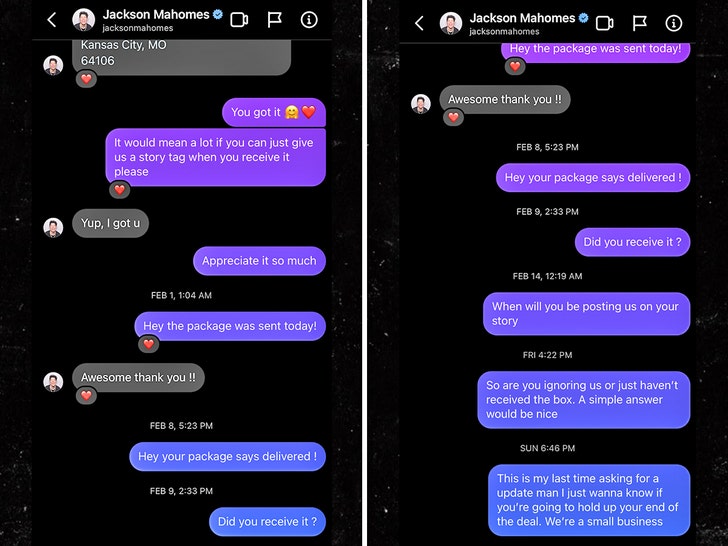 Farha tells us he reached out to Mahomes several times over the next 2-3 weeks after the delivery … claiming screenshots of the DMs prove he was being ignored.

“It’s not like he wasn’t seeing our messages,” Farha says. “He was opening them every time I sent a message. He looked at all my DMs for 2 weeks straight.”

So, Farha decided to enter Mahomes’ world by posting a TikTok video this week sharing his side of things … and that’s when Jackson hit him back. 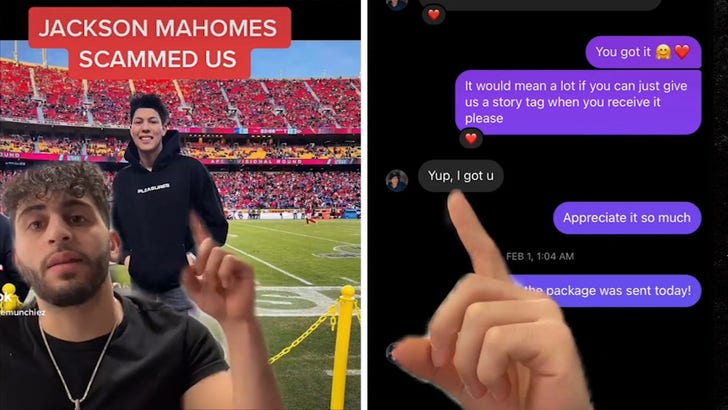 “He still says he never received it after the video went viral,” Farha says. “It took a video to go viral, bashing him, for him to actually respond!”

But, Farha tells us he believes Mahomes DID receive that package … especially with the tracking info and the way he ignored him for weeks until he put him on blast.

So, what now?? Farha doesn’t even want Mahomes to give his business a shoutout anymore … and is throwing shade at him for taking advantage of being the younger brother of an NFL superstar. 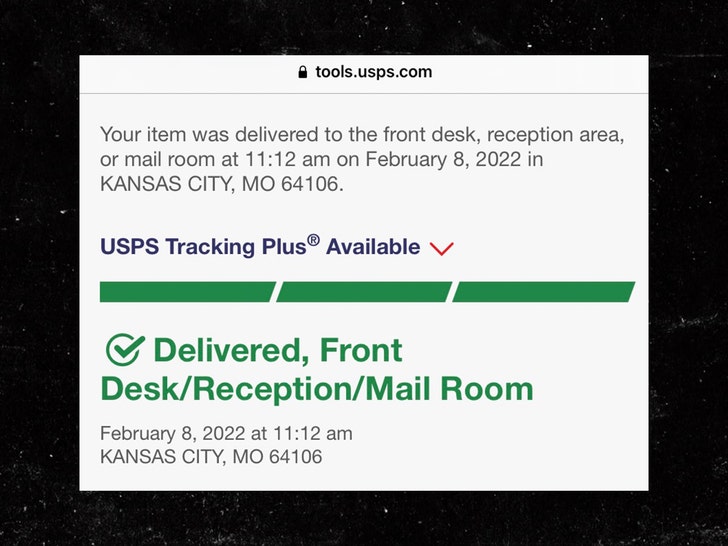 “My message for him is to basically stop taking advantage of clout, trying to scam small businesses because that’s just not how the world works.”

“He’s just using his brother’s name and fame for himself to get free stuff.”

This isn’t the first time Jackson was accused of similar behavior — just 2 months ago, he was ripped by a restaurant in Kansas City for allegedly clout chasing after he made a social media post about their bad service.

The restaurant later apologized to Mahomes after they criticized him — but it doesn’t seem he’ll be getting one from Rare Munchiez.

We reached out to Jackson … but so far, no word back.