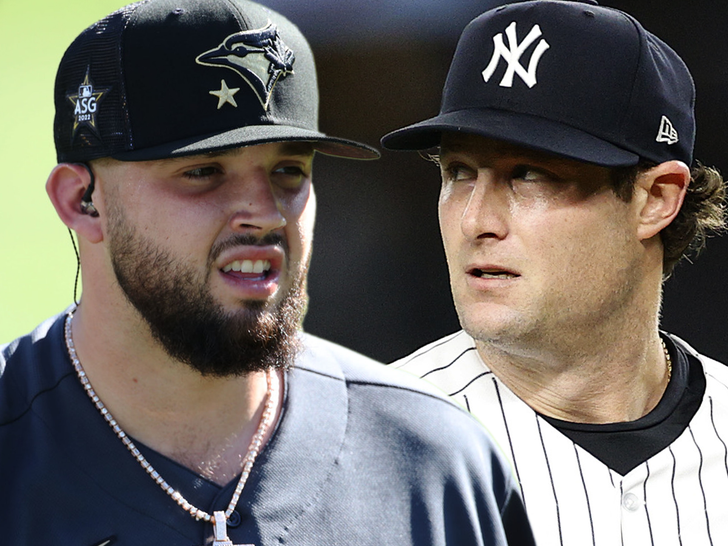 It ain’t Alex Rodriguez, Barry Bonds or Mark McGwire … no, according to Blue Jays ace Alek Manoah, the “worst cheater” in the history of the MLB is Yankees star Gerrit Cole.

The 24-year-old Toronto righty dropped the spicy accusation while on Serge Ibaka‘s “How Hungry Are You?” show … in order to avoid drinking a cricket-filled, tea-like concoction.

“He cheated,” Manoah told the NBA star without much hesitation at all. “He used a lot of, like, sticky stuff to make his pitches better. And he kinda got called out on it.”

Back in 2021, the MLB famously began a crackdown on the use of foreign substances on baseballs — and many around the league believed it really affected Cole, who some thought had relied on it all heavily.

In fact, Cole’s now-teammate, Josh Donaldson, specifically called out the right-hander when he was a Minnesota Twins, saying he could see Cole’s spin rates dramatically drop following the league’s ruling.

Clearly, Manoah thinks there’s some serious truth behind the allegations … though he didn’t evaluate further during the show.

As for Cole’s take on it all, he never specifically denied using sticky stuff to make his baseballs move more … infamously telling media members in 2021, “I don’t quite know how to answer that, to be honest.”

here’s gerrit cole’s response when asked point blank if he has ever used spider tack, one of the sticky substances baseball is looking to crack down on pic.twitter.com/rKFOksIDoW